A couple of years ago I applied for W1AW (or NU1AW) privileges from K1ZZ.

To my surprise Dave contacted me this year to say that W1AW was available-WOW !!!

As IARU contesters know, having a HQ call (aka, MULTIPLIER) is a big deal. As someone who lives for runs this was more than slightly exciting !

I contacted our Chairman, K4QPL, who agreed to co-ordinate activity as we were going to need some help to properly populate the bands.

The final lineup was

Murphy had his hand in things as AA4NC had feed problems on 40M and 10M that necessitated moving operations on those respective bands to K4MA and NT4D's QTH.

Additionally, we lost two operators due to illness and family commitments.

W0UCE had come down the previous night to help with setup and once things seemed to be humming we switched the 20M position on. Wow, conditions were super- wall to wall russians calling NY4A. We never had to CQ and finally had to pull the switch as the band was not going to drop.

My impression is condx peaked that night but the Saturday opening of IARU was decent and, most notably, the low bands were pretty quiet. 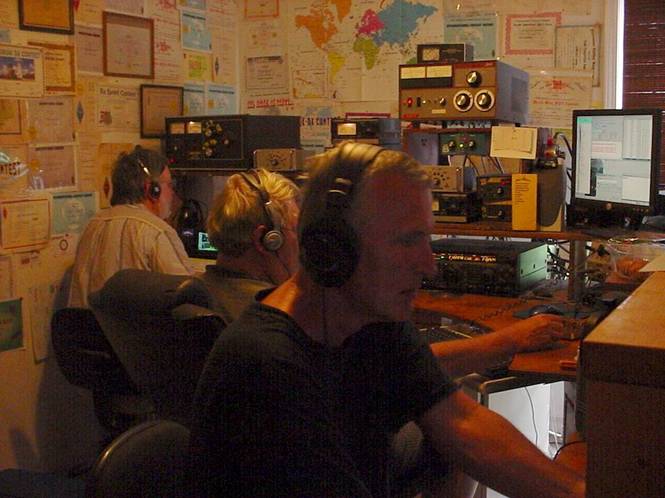 Our first QSO was with K1ZZ !  The 20M pileups were big but very manageable and Jack had a fairly good European opening on 15M.

Later W4MY came by and assisted opening a third band (40M) which was slow until it got closer to darkness.

We never did make much happen into JA. A combination of the sunspot cycle and a cyclone tearing right up the JA coast made only a handful of qsos possible on 40/20.

The biggest excitement for me was opening 80M CW. Probably the biggest pileup (on me) I have ever heard greeted W1AW/4. The challenge then became three fold.

In terms of the latter, we found it was necessary to give the stations call at the END of the qso and then, sometimes, it was still necessary to repeat the QSO. This certainly cut in on the rates but my adrenaline was '59' by then. QSK was a huge help, I could time how much repetition to use and when to hand it back to the caller.

Since it was important to get as many multipliers in Europe into the 80M log as possible- and sunrise comes FAST this time of year on 80M, the 4L yagi was a huge help. In many cases the 4square had to be switched in to even make out any non-east coast callers.

All good things must end, and as the evening (and Eu sunrise) occurred,  things went down hill in a big way. This is where the previous nights condx would have really helped- 20M just did not do much after Eu sunrise. I could weakly hear them but things were way down.

Thankfully, after our sunrise, 15M yielded a few qso's with European fresh meat but my sense was they did not realize W1AW/4 was a multplier-plus many were (very) casual operators.

For slightly over 6 Million points.

(Pls note that the scoring chronologically looks thru the combined log for zones & sections and awards it to first found, thus the “SEC” (actually Z+Sec) breakout is NOT accurate for comparing CW to SSB).

I had foolishly envisioned merely needing to combine ADIF from Writelog and N1MM but discovered they produce very different ADIF.

Using the CBR2ADIF utility from VE3KI, it was possible to port the ADIF from Writelog over to N1MM, but it was discovered that the one digit zone from Writelog produced a problem where N1MM incorrectly counted zone '8' and zone '08' as two zones.

VE3KI kindly enhanced CBR2ADIF so that that this should not be a problem for folks, combining disparate logs via ADIF, in the future (he now always pumps out two digit zones).

Thanks to the ARRL and K1ZZ for the privilege of using W1AW/4- it was a blast !